A candidate must be either:

(a) A candidate for this examination must not have attained the age of 32 years as on 1st August 2019, i.e. the candidate must have been born not earlier than 2nd August 1987.

(b) The upper age limit is relaxable as follows.

(vi) Up to a maximum of five years in the case of ECOs/SSCOs who have completed an initial period of assignment of 5 years Military Service as on 1st August, 2019 and whose assignment has been extended beyond 5 years and in whose case the Ministry of Defence issues a certificate that they can apply for civil employment and that they will be released on 3 months notice on selection from the date of receipt of offer of appointment.

Note 1: Candidates belonging to the Scheduled Castes, the Scheduled Tribes and the Other Backward Classes who are also covered under any other clauses of para 3(II) (b) above, viz. those coming under the category of Ex-servicemen, persons domiciled in the State of J & K and (a) blindness and low vision, (b) deaf and hard of hearing, (c) Locomotor disability including cerebral palsy, leprosy cured, dwarfism, acid attack victims and muscular dystrophy, (d) autism, intellectual disability, specific learning disability and mental illness; (e) multiple disabilities from amongst person under clauses (a) to (d) including deaf-blindness. will be eligible for grant of cumulative age-relaxation under both the categories.

Note 2: The details of Functional Classification (FC) and Physical Requirements (PR) of each service are indicated in Appendix V of this notice which is identified and prescribed by the respective Cadre Controlling Authorities (CCAs) as per the provisions of Section 33 and 34 of the Rights of Persons with Disabilities Act, 2016. Only those 6 categories of disabilities mentioned in Appendix V shall apply for the examination under Persons with Benchmark Disability (PwBD) Category. Therefore, the candidates belonging to the Persons with Benchmark Disability categories are advised to read it carefully before applying for the examination.

NOTE 3: The term ex-servicemen will apply to the persons who are defined as Ex-Servicemen in the Ex-servicemen (Re-employment in Civil Services and Posts) Rules, 1979, as amended from time to time.

NOTE 4:The age concession under Rule 3 II(b)(v) and (vi) will be admissible to Ex-servicemen i.e. a person who has served in any rank whether as combatant or non-combatant in the Regular Army, Navy and Air Force of the Indian Union and who either has been retired or relieved or discharged from such service whether at his own request or being relieved by the employer after earning his or her pension

NOTE 5: Notwithstanding the provision of age-relaxation under para 3 (II) (b) (vii) above, a Person with Benchmark Disability will be considered to be eligible for appointment only if he/she (after such physical examination as the Government or appointing authority, as the case may be, may prescribe) is found to satisfy the requirements of physical and medical standards for the concerned Services/posts to be allocated to the Persons with Benchmark Disability by the Government.

Save as provided above the Age- Limit prescribed can in no case be relaxed.

Note 1: Candidates should note that only the Date of Birth as recorded in the Matriculation/Higher Secondary Examination Certificate or an equivalent certificate as on the date of submission of applications will be accepted by the Commission and no subsequent request for its change will be considered or granted.

Note 2: Candidates should also note that once a Date of Birth has been claimed by them and entered in the records of the Commission for the purpose of admission to an Examination, no change will be allowed subsequently (or at any other Examination of the Commission) on any ground whatsoever.

NOTE 3: The candidate should exercise due care while entering their date of birth in the respective column of the online application form. If on verification at any subsequent stage, any variation is found in their date of birth from the one entered in their matriculation or equivalent examination certificate, disciplinary action will be taken against them by the commission under the rules.

For admission to the examination, a candidate should have passed the written and practical parts of the final M.B.B.S. Examination.

NOTE-1: A candidate who has appeared or has yet to appear at the final M.B.B.S. Examination may also apply. Such candidates will be admitted to the examination if otherwise eligible but the admission would be deemed to be provisional and subject to cancellation, if they do not produce proof of having passed the written and practical part of the final M.B.B.S. Examination along with the detailed application which will be required to be submitted to the Commission by the candidates who qualify on the result of the Computer-based examination. Such proof of passing the requisite examination should be dated earlier than the due date (closing date) of Detailed Application Form of the Combined Medical Services Examination, 2019.

Biosensors and their applications in Modern Medicine 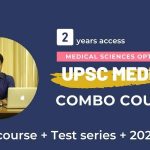