Delay in release of first-ever nutrition survey conducted by the Centre causes concern among health experts.

These are among the key findings of the first-ever national nutrition survey conducted by the Centre, yet to be made public, providing for the first time hard evidence of the coexistence of obesity and under nutrition, among school going children.

The Comprehensive National Nutrition Survey conducted by the Ministry of Health and Family Welfare and UNICEF between February 2016 and October 2018 is the first study undertaken to measure malnutrition, including micro nutrient deficiencies through biochemical measures such as blood and urine samples, anthropocentric data as well as details of non-communicable diseases such as diabetes, hypertension, cholesterol and kidney function in children and adolescents.

Moreover, these are collected for children in the age group of 1-5 years and adults, but not for school going children between the age of 5 and 19 years. 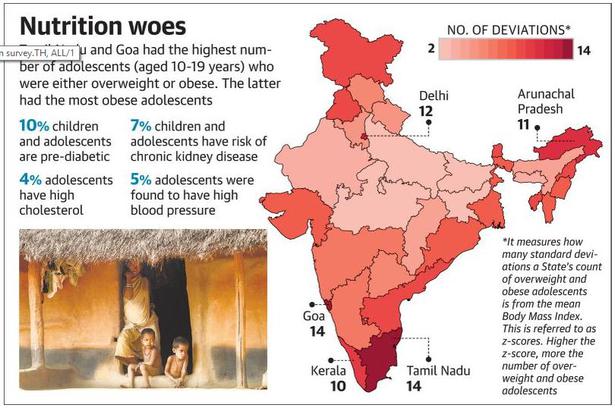 Prevalence of indicators of non-communicable diseases alongside indicators of under nutrition shown by various NFHS surveys such as stunting, wasting and underweight.

Due to the seriousness of these findings, there has been concern expressed by medical practitioners and nutrition experts on the delay by the government in releasing the study. On September 3, the Ministry held a video-conference with National Health Missions of all States to discuss the study and many have been waiting for it to be released.

An official of the Directorate General of Health Services said the report is likely to be made public any day. However, many closely involved with the study said the delay by the Ministry of Health and Family Welfare is inexplicable as the findings have been known for nearly six months and both NITI Aayog and the Prime Minister’s Office had given their assent for making them public.

With September being observed as Poshan Maah or Nutrition month, many argued that not all findings may be palatable to the Centre, forcing it to postpone releasing the study.

Health policy experts said the study showed that the government will have to focus on obesity alongside undernutrition as part of its Nutrition Mission.